idle game about existential risks and the death of civilizations

best played in its own browser tab

hint: it is possible to win

I was directed to this game from a GDC talk by Heather Robertson.I finished the game after about 5 civilizations failed, what an awesome experience. I was invested in my little civ of Pibgu gently pushing them forward and egging them on. Worried when they began to develop their own dangerous technologies. I ended up copying the whole story to a text file and keeping it as a souvenir so i will remember the mighty Pibgu!

The Oveo have developed a simple system of writing, which they use primarily for record-keeping.

The Oveo have developed a simple system of writing, which they use primarily for worship.

Above is the result when you choose what to teach to a civilisation and you click at the same time they learn it.

Btw, STUPID WANDERING COMETS STOP GETTING LOST AND COLLIDING WITH MY CIVILISATIONS!!!

This game is pretty interesting; nice to play while you're reading something else... one question, though: on a global scale, wouldn't AI takeover simply mean that one advanced civilization was immediately replaced by another, except non-organic?

This game is incredible.  I love it.  So many civilizations die though.  Yikes.  I've spent too much time on this.  Nice work.  I've got to put it down now.

So many wiping themselves out.  ARGH!

I gave metal working to a civilization and then they immediately died to a war over metal deposits. Not even a year.

"The city of Mu'naq has become renowed among the Afju as a center of commerce and trade. In particular, the fine fabrics produced there are highly sought after by traders around the world." There is a typo: renowned, not renowed. Other than that - absolutely brilliant.

Nice catch – thanks for letting me know!

No problem! I love the game, thanks so much for making it! My best civilization, the Afju, got wiped out by a genetically engineered virus in the year 3615. Dang... I shouldn't have taught them Genetics!

I don't like the whole "slammed into an asteroid" maybe make that happen a bit later, when our civs actually have a chance against it.

My biggest civilization wiped themself off the planet through a nuclear war! XD

That's nothing... I had a SPACE FARING civilization that got the "Your STONE TOOLS are so effective the so-and-so wild beast was hunted to extinction, causing the collapse of your civilization due to food shortages."  Come ON.  With genetics, computers, even just basic agriculture this species ditched their stone tools ages ago and had no reliance on hunting.  This is a BUG.  If it helps (either debugging, or players trying to survive), one unusual thing about this species is they never developed fishing.  So maybe that's the underlying cause.  Still, it's pretty unrealistic and should be fixed.  Only example I could find though, of totally blatant breaking of the suspension of disbelief... so thumbs up on an overall awesome game and one of my all time favorites in the genre!

When will there be an update? :D

i got extremly lucky as the SECOND civilization i encounterd survived long enough to develop tfl travel and join me :D

Reply
im not here3 years ago

all societies self destruct with fast advances in technology. If their technology is slow to progress, however, they become unsustainable and die out. Isn't there a way to research philosophy?

The Pocpuc were almost there! Stupid AI with command control.

What a great game! I really like the mix of a classic civilization game and the idle component.

The fostering of civilizations in parallel is really nice. I currently try a similar approach in my current prototype. ( http://twitter.com/FermiGame )

Im willing to use my time to test your game

That would be awesome, i think I will have a external build for alpha testing in the next months.

If you like send me your email to joergreisig@gmail.com and I write you something as soon as I have something testable.

My email is Wigan96@hotmail.co.uk - just to verify it iis me, I will copy and past your comment in the mail too that you just sent me :)

I will be looking forward to testing a build once it becomes available. Sorry, I have just seen this comment. I have been busy today

What do you do when a civilization joins you?

you've won, and welcome the species into the greater galaxy

Come on man, I hate you! The Uyumkauc were so close to FTL, and you killed them! It's pretty amazing how attached you can make me to a piece of auto-generated text.

This game has a lot of potential, I really like it! It only needs a UI upgrade and a downloadable form of the game, whether it is on PC or Mobile. The only complain about this game is how hard it is to keep up with old civilizations and young civilizations, I would suggest making them a tab that you can click on instead of a single file column

I loved this game so much!

However, there seems to be small bug: sometimes the clock just stops ticking and so the game stops updating and I have to refresh the page. It happened to me at 4747 and again at 4189.

Hmm, I've never seen that one before! Mind letting me know which browser & OS you're using (including versions) so I can try to reproduce the issue?

Link seems to load nothing but a blank screen - broken forever or just for now?

It should be back up now! Some browsers didn't like the way I was loading the Tone.js audio library over HTTP instead of HTTPS. I pushed a fix that seems to have resolved the issue, at least for me.

Seems to be working for me on my phone, presumably it's fixed on desktop too. Thanks, Max.

I just came here to say, this is an awesome game. Thank you for building this!

Would be cool to download an EXE for this

it's been about 3600 units and EVERYONE IS DEAD AND ONLY ONE GROUP TOUCHED SPACE.

...Is there any possiblity of an easy mode?

This is a fantastic game! At first I was just idly checking it once in a while to see what kinds of things it would generate, but then one civ started doing well so I started paying really close attention and trying to help it out and guide it. I ended up feeling really attached to it. Being aware of other civilizations rising, falling, and being wiped out in the background while I all but ignored them to dote on my favourite was a very interesting experience, and really strengthened my emotional connection to the civ I was focusing on. Wonderful job on this, I plan to come back to play more later.

(RIP Ascat civilization, I was so proud of you)

I love this! hope you update soon and add new things such as new tech and behavior ?

Thanks! I'm definitely planning to continue working on the game for a while – I'd especially like to add some of the planned events that I wound up dropping to get in before the jam submission deadline.

I would like to help you with ideas as much as I can, feel free to contact me whenever you like. Do you think you could tell me/us some of the things you would like to implement?

At the moment we're limited, which is okay for now but I had a few ideas which came to mind.

1. Ability to add your own civ you can influence, but you choose the traits/what planet they're on also star type and the name. (Some level of customization?)

2. Once a civ is successful and manages to colonize other planets, wouldn't it be cool if they could perhaps interact with one another in some way instead of just giving an option to allow the civ to 'join us' - notify players/watchers who are on this game about that.

3. The log gets a bit complicated after some time, more than 3 civs may pop up and may be over-whelming to control, would be cool to give us a choice to cap the amount of civs which can pop up if the player wanted.

4. More interactions :- Instead of just technology, what about a bonus event which you can choose every 5 years? for example. A new resource deposit has been found, (only show up if you have the gun powder tech) and that bonus could help speed up the civ growth or perhaps that would make them more greedy - cont:- the traits should perhaps change over time, with values going up or down which could help or destroy them in the end.

5. More events for each civ which could influence the growth or downfall of the empire. So like our real life civ - humans had what we call a quantum leap during wars or after it. Wars could lead to unification of the planet (World domination) or nuclear fallout (which you already implemented in some way)

6.Maybe more tech? New weapons - possible upgrades , if the civ upgrades the weapons, make it so that they could eliminate themselves or lead to the global dominance event (once discovered tools) - dont end it there either, global dominance is not always a bad thing, could speed up the time in which they could acquire new tech or build interesting structures or influence the civ to build monuments and so on

7 - simple idea, someone may of suggested it but perhaps you could give us the ability to clear civ logs to make it much easier to handle/delete existing civs if too many pop up.

8. Pause button would be cool, like I dont want my civ to die or something whilst..you know.. haha.

9. Give us more options to influence a civ, maybe becoming their God. If we type a certain word/command, we could encourage a civ to go for a specific tech or goal - allow us every so often - to type. Every 3-10 years? (civ would not have to listen to your command) if they dont....well...

comes to my next idea.

10. Powers/Disasters, There could be nothing better but to cause an extinction event - natural disasters- or maybe a disaster that only effects the civ for a short while but does not completely halt their growth.

11. Age of Civ/ Statistic page - Im sure you could go on and on with that one, probably a lot of effort to code and handle so I don't expect you to implement any of my ideas, but feel free to use your imagination on my ideas and I am sure, this urmm..simulator could turn into a bit of a civ management game or a god civ with some management to it. I dont know but what I do know it would add replayability

sorry for the massive text and some typos.

Some of which I just randomly came up with..

I love the concept and definitely something we can all work with. Would be cool if we set up a forum for suggestions to be made and perhaps gather a team in which we could help in terms of coding and programming. I don't know but it is just an idea but takes a lot of time. All of what I said probably would be difficult to implement but with tech and stuff improving and always changing, the only limit would be your creativity and imagination

I'm really enjoying this. Very simple but a great concept and very good execution. I've been playing for a while now.

I really liked this, thanks, it was beautiful. Great work!

Thanks for the feedback, and glad you liked the game! 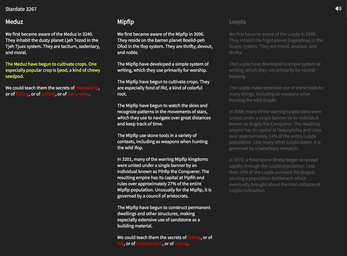 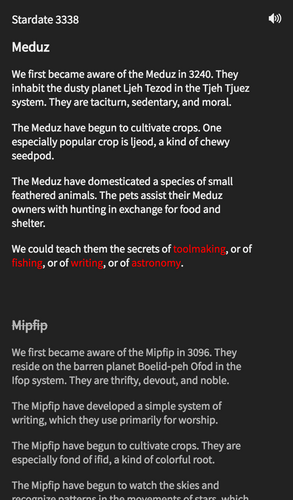